Benign vocal fold tumors are a group of diseases characterized by tissue proliferation in certain areas of the vocal cords and characterized by a benign course: they do not germinate into surrounding tissues and do not metastasize (tumor foci in other organs) that are not characterized by uncontrolled growth, they grow relatively slow. The disease is more common in men, especially over the age of 40.

What Are Vocal Papilloma Symptoms?

Check the most common symptoms of vocal papilloma:

During a conversation, when the vocal cords are closed, the tumor may be pinched between them. This is manifested by the fact that the voice suddenly disappears. Diphthonia takes place when there are two voices of different heights are present when talking. This is due to the fact that the tumor divides the vocal cords into two parts, which fluctuate asynchronously. With a large tumor that covers most of the lumen of the larynx, shortness of breath is characteristic.

How to Disctinguish Papilloma Vocal Cord from Other Tumors?

Tumor-like laryngeal formations and actually benign tumors are distinguished. The possible formations are the following: 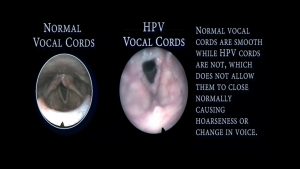 Actually benign formations differ in the structure of the tissue:

Often, it is difficult to distinguish one benign neoplasm or a tumor-like state from another one by appearance. The final diagnosis can be established only after taking a biopsy.

What May Cause Papilloma Vocal Cords?

Analysis of complaints and history of the disease inlcudes: 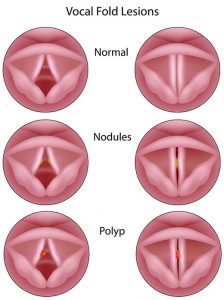 To clarify the diagnosis, radiological examinations are carried out, for example, computed tomography (CT) scan of the larynx. A biopsy is taken to determine the nature of the tumor, sometimes from several places. If the tumor contains a large number of vessels, replace the biopsy with a puncture (tissue from the inside of the tumor is taken with a special needle), followed by examination of the cells. If the tumor is small, sometimes it can be completely removed by taking a biopsy. Consultation with an oncologist is also possible.

Treatment of all types of benign vocal chord lesions, except for the choroid, is only surgical. Tumors are removed through the larynx (endolaryngeal) using a microscope and microtools or, for large education sizes, by external access (through an incision in the neck). Instead of traditional cutting tools to remove tumors of the vocal cords, laser, electrosurgical methods, ultrasound, cryodestruction (cold) are also used.

Vascular tumors respond well to radiation therapy. They can also be removed surgically, but the risk of bleeding is high. For the treatment of papillomas (papillary growths of the mucous membrane) of the larynx, antiviral, chemotherapy, and radiation therapy are also used. At first, after surgery, voice rest is recommended. In the future, they recommend rational voice loads — try not to scream, not to sing in an uncomfortable range. Breathing and voice exercises should be done.

In the early stages of vocal nodules or vocal cords granulomas (tumor-like conditions that are bumps on the surface of the vocal cords), conservative treatment is possible: observance of the voice mode, voice exercises, exclusion of irritating factors (smoking, alcohol, inhaling smoke, etc. ), infusion of enzyme, astringent drugs into the larynx.

To prevent re-development of the tumor, the following measures are taken:

Check whether you have any symptoms described here and seek medical attention at the first signs of the disease.